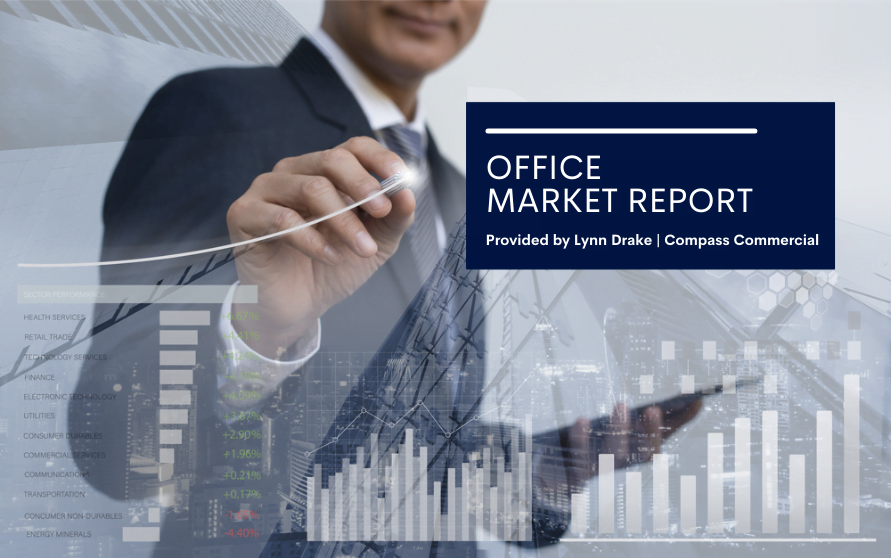 While the employment sectors that traditionally use office space are leading the post-pandemic jobs recovery in Detroit, the increase in employment has not resulted in an increase in the use of office space, as many employers continue to offer hybrid or remote work options to meet the preferences of their employees. Thus, office demand in Detroit continued to drop over the past 12 months (approximately 210,000 sf. was returned to the market), while vacancy remained flat (at 11.3%). Annual rent growth has moved back into positive territory (at .5% and a slightly higher 2% for 1 & 2 Star properties), but the pipeline remains full, and development is overly concentrated in areas already struggling with elevated vacancy and availability rates (Central Business District, New Center, and Detroit West of Woodward).

Leasing finally began picking up in Q2 of 2022, when 131,408 sf. were absorbed. As companies continue to balance flexible working conditions with office space needs, many are demanding space improvements to maintain their leases or are trying to find ways to reduce their office footprint. The highest vacancy rates are in the Troy South Submarket (25.9%), Southfield (18.8%), and Detroit West of Woodward (21%), while the Central Business District, which had been struggling, has improved in recent months, pushing the vacancy rate down to 7.4%. Suburban areas around Detroit have also seen slight increases, but many firms continue to vacate prior to the end of lease terms, and sublease space is at an 8-year high, with vacancy expecting to continue elevating through 2027.

Detroit rents remain in the middle of the pack for both the Midwest region and the State of Michigan. With average asking rents of $21/SF as of 22Q3, rents in Detroit are higher than Grand Rapids and Lansing but lower than Ann Arbor. As year-over-year rent growth reached 0.4% in 22Q3, even the more expensive submarkets have moved back into positive territory, including suburban areas like Birmingham, Bloomfield, and the Central I-96 Corridor. Meanwhile, the lower-cost submarkets have experienced greater growth, as they appeal to the increasing number of cost-sensitive tenants. Co-Star’s Base Case forecast suggests that improvement should continue and return to healthier levels midway through 2023.

As the rate of new starts has finally started to slow, new construction appears to be catching up with the current reality. Roughly 2 million SF of space, representing 1% of total market inventory, is currently underway. The Central Business District and New Center lead the area in new developments, while largest suburban market is Detroit West of Woodward.

Here are the top submarkets in Detroit for the third quarter:

As new construction starts continue to decline in response to a full pipeline, the office leasing market is expected to rebound in the next couple of years. With just under 200,000 sf. of construction starts in the past 12 months, the current space underway represents 1% of total market inventory, and most new construction projects are within the city of Detroit. The largest of these projects includes GPC Adams’ TCF Tower on Woodward Avenue, which is set to be completed October 2022, and Ford Motor Land Development’s Michigan Central Station, which has an estimated delivery date of January 2023.

Here are the 7 largest properties that are, or were, under construction in the third quarter:

Rebounding from subdued investment activity in 2020, sales over the past 12 months have totaled $716 million, surpassing the 5-year average of $534 million. The submarkets with the greatest investor interest were Bloomfield West ($80.8 million), Birmingham ($60.7 million) and Troy South ($60.4 million). The suburban areas of the Southern I-275 Corridor, Farmington/Farmington Hills, and Troy North were also very popular. In addition, pricing has also picked up, reaching $230 sf. during 22Q3, while the market cap rate has decreased to 9%, which aligns with the 5-year average.

The catastrophic unemployment resulting from the Covid-19 pandemic had a snowball effect on the economy, which the federal stimulus packages tried to respond to with uneven results. Detroit has seen improved growth this year, with another 152,400 jobs added in June, bringing the year-over-year job growth rate to 8.6%, ahead of the national rate of 5.8%. Nevertheless, the nature of work, specifically where it takes place, seems to have been transformed for good.

Over 70% of office workers have indicated an explicit preference for working from home when possible. Since they make up the largest sector of the workforce in Detroit, at 29%, this may result in significant changes in the office market in the future. For instance, one of the largest employers in the state, General Motors, has transitioned to what it calls a “work appropriately” plan, which allows employees to work wherever they work most efficiently and productively.

Meanwhile, economic recovery across southeastern Michigan has been largely concentrated in suburban areas, even as key economic drivers that should aid in recovery continue to strengthen throughout the Detroit Metro area. Michigan ranks 1st in the nation for foreign direct investment (FDI)-related job growth, most of which is situated in the manufacturing sector, an area expected to see continued improvement as consumer spending shifts from goods to services, easing the pressure on supply chain issues.

This is a summarized version of an office market report that was originally created by CoStar. The full report can be found here: https://www.compass-commercial.com/office-real-estate-report-2020/

Protecting Your Rights as a Tenant Begins with Reading the Lease

Words of Wisdom from Helen Keller

Homework Required to Buy That Cool Building You Just Saw