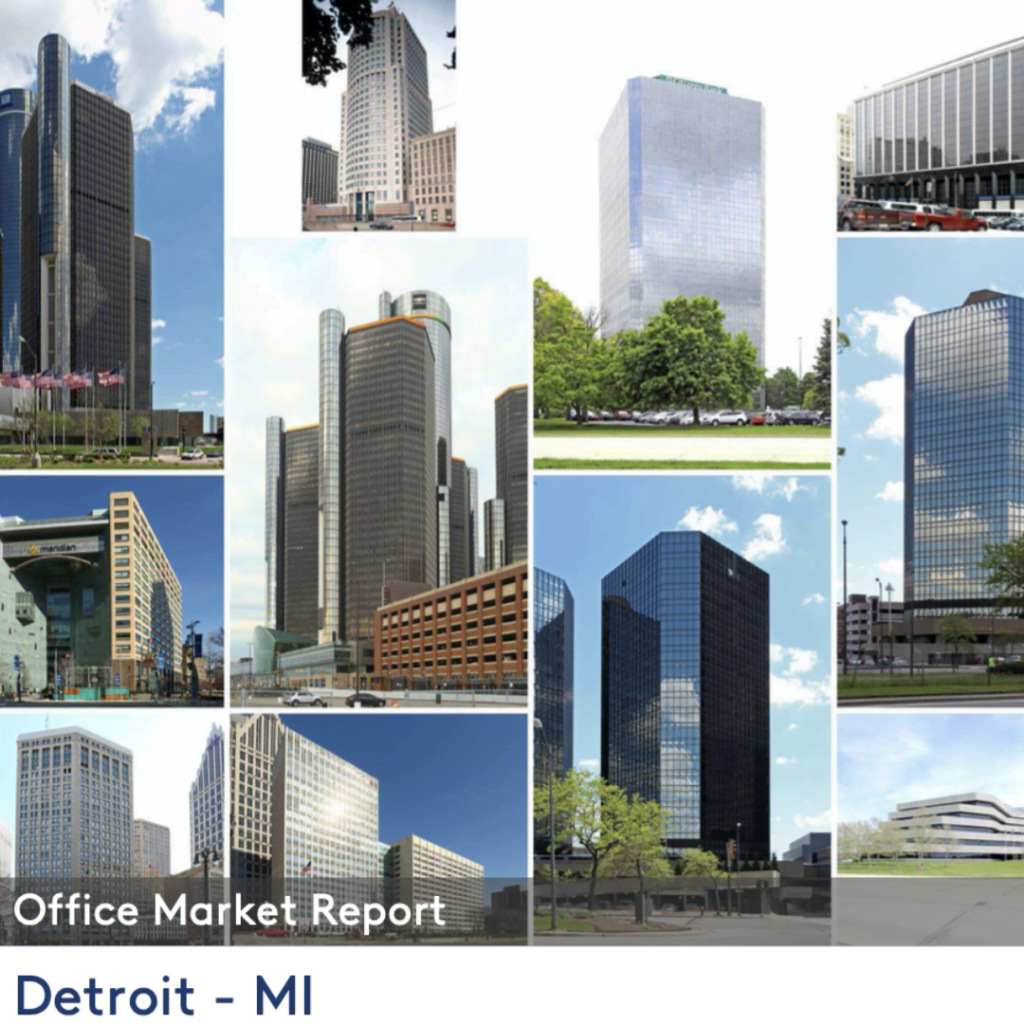 The first quarter of 2021 wrapped up one of the most unusual years in recent memory. While the Covid-19 pandemic continued to impact development in Detroit, which is decelerating, particularly because of the region’s historical reliance on industries like manufacturing, the announcement of a vaccine began to improve future outlooks. Although leasing and rentals remained low and showed signs of ongoing pandemic responses, there was an uptick in sales and investing. However, the longer-term outlook remains uncertain, with expanded adoption of remote work likely reducing demand for space. At the same time, a new focus on health and social distancing in the workplace could increase tenants’ space requirements. Continued uncertainty surrounding the trajectory of the coronavirus is delaying any big moves, with many firms instead signing short-term extensions upon renewal.  Here is the Office Market Report.

The pandemic-sized dent in office leasing is expected to slowly recover this year, but only after it peaks at around 12% (it was 11.2% at the close of Q1). The biggest recent leasing moves include automotive supplier Marelli consolidating 2 former facilities into one lease of around 200,000 SF at the former Federal-Mogul building and advertising agency Doner leasing 56,000 SF at the 400 Galleria Officentre building in Southfield. Both of these represent the larger trend of tenant relocations currently driving leasing.

The bottom dropped out of rentals in Q4 2020; however, Detroit’s average -0.8% remained higher than the -1.4% overall for the US, suggesting that this is not a regional phenomenon and is related directly to the pandemic. Locally, the greatest price drops have been among older, lower-rated properties in the Airport District and Birmingham or in areas with more available rentals, such as North and South Troy, Bloomfield, and Southfield. Areas with higher-rated spaces and fewer available rentals, such as Birmingham, Bloomfield, and CBD, have maintained their rates and prices overall.

Industrial development in Detroit remains in line with the national average, while spec development is about 12% less than the national average. Completed projects last year came in slightly under 500,000 SF, but that may slow a bit as the global economy recovers from the Covid 19 pandemic. The majority of construction is taking place in CBD and surrounding submarkets. The largest completed project during Q1 was Illich Holdings delivery of a 127,000 SF property at 2715 Woodward Ave in January.

Here are the top submarkets in Detroit for the first quarter:

About 3.5 million square feet is under construction. Much of this in the CBD, Detroit-New Center, and St Clair & Lapeer Counties submarkets. Current large projects include Ford’s $350 million renovation scheduled to be completed in 2023, and Mercedes Benz’s 200,000 SF space in Farmington/Farm Hills, which should be completed in about a year.

Here are the 5 largest properties that are, or were, under construction in the first quarter:

As with every other city in the country, Detroit’s development was rudely disrupted by the Covid-19 pandemic, with unemployment levels reaching 30% during the worst part of the shutdowns in April 2020. However, because the City’s economy is not largely reliant on the hardest hit industries, like tourism and hospitality, we recovered 60% of those losses quickly and are rebounding well due to strengths in manufacturing and industrial resources with a current unemployment rate of 8.1%.

As the vaccine rollout continues and employment practices and regulations return to pre-pandemic norms, the economic rollercoaster should also slow down. Additionally, with industrial space demand projected to increase over the next 5 years, construction and related industries should also see a nice (if gradual) boost. Ultimately, the whole world is recovering from a major global economic downturn due to the pandemic, and Detroit is on track to reach a healthy growth rate ahead of many other places.

This is a summarized version of an office market report that was originally created by CoStar. The full report can be found here.

Who Controls the Thermostat?

The Pitfalls of Construction and the Angels Among Us

Getting Prepared for Game Day

The Rate of Change

The ABC’s of Real Estate